As indicated in the soils report, the entire site is underlain by up to 10’ of fill comprised of loose to dense silty sand with varying amounts of gravel. This is followed by very loose to medium dense deposits of silty sand with gravel or very soft to medium stiff sandy silt and peat to depths of up to 25’. Below this point, the native soils become dense to very dense and stiff to hard. 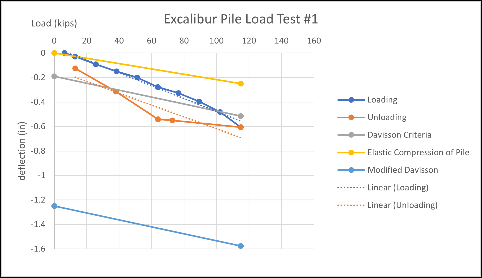 Groundwater was observed at 10’ below ground surface (bgs), contaminated soil/water is located 30’ bgs across northern portions of the site; remnants from a dry cleaner which used to sit on a now vacant lot to the North. As such, the piles are not to penetrate further than 30’ so that contaminants are not dragged down and spread or possibly corrode the piles. Peat deposits up to 5’ thick was encountered in multiple borings on the southern portion of the site. 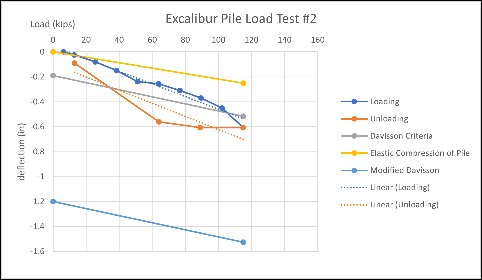 near the center of the site and the other to the southwest, with a target capacity of 100 kips ultimate compression. McDowell used MPS’s 1.75” round corner square (D10) reaction anchors with 10-12-14 helices to depths ranging from 8’ to 14’ bgs.

Originally, driven (pin) piles and traditional helical piles were considered for this project. However, the driven piles would require installation depths greater than 30’ to reach their desired capacity and the helical piles would not be able to penetrate the dense gravelly fill. The tough soil profile did not affect the Excalibur pile’s ability to penetrate and embed below the peat layer at 18’ to 20’.

The load intersects the Davisson failure criteria near 105 kips, this is the point at which the shaft adhesion is fully mobilized and load resistance is shifted to end bearing on the multiple driver plates. For friction piles, this would be considered the failure criteria. Whereas these piles are designed for end bearing on the multiple driver plates. The Modified Davisson Method has been proposed for end bearing piles, where the deflection failure criteria is defined as being equal to 10% of the average plate diameter. This point would occur at loads yielding 1.2” of deflection. Intersection with this line equate to plunging failure of the pile. Extrapolating from the above charts, plunging failure would occur near a 170 kip applied compressive load.

Typically, a maximum deflection of 1” is used. From the available loading data, it can be extrapolated that both piles would have 1” deflection from an applied 150 kip compressive load. This falls in line with the estimated capacity using the typical torque factor (Kt) of 6-ft for 4.5” diameter piles. 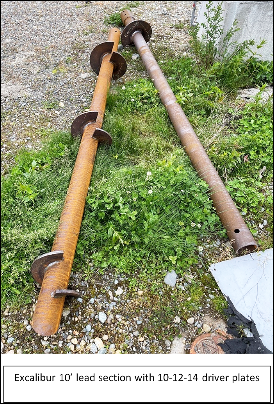 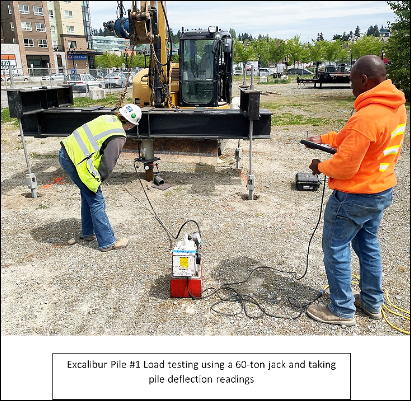 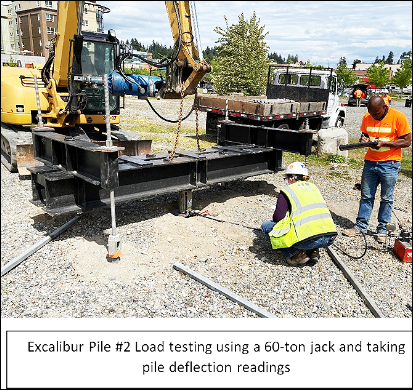