Helicals and Homeowners: An IDEAL Marriage Made in (Pigs) Heaven!

Sea Isle City is a barrier island in Cape May County, halfway between the City of Cape May and Atlantic City in southern New Jersey.  It is bordered by the Atlantic Ocean to the East and the Intercoastal Waterway to the West.  Most of the structures in the city are on deep foundations due to a high-water table with beach sand in the V-zone on the ocean side and a low blow count (WHO) marsh mat on the westerly bay side.  Recently, Pigs Heaven, a local contractor, was called upon to provide

support for an addition at a home in Sea Isle, because the addition had caused the exterior foundation, party wall, and interior slab to settle.

Many of the usual suspects were at play in driving both the homeowner and the Engineer of record, Hyland Design Group, to use helicals. There were neighbors on three sides, limited access, low overhead, segmented piles, small/low impact equipment, as well as the necessity to install piles inside and

out.  Salt water was encountered at two and a half feet, so dewatering was required for the sixteen underpinning piles. The GC pulled a slider in the rear of the house to provide access for an MT 85 Bobcat Walk Behind for the interior work, which consisted of three underpinning piles for the interior wall and four new construction piles to support the grade beam.  Pigs Heaven constructed a ramp to move the machine inside.  This avoided the necessity of using portable/hand-held

equipment to accommodate the install, which would have slowed the work and been more costly for the 35’ piles.  The prep work included saw-cutting and demoing the existing slab, which provided enough additional clearance to allow for the use of five-foot sections instead of three footers.

The exterior work consisted of four new construction piles to support the rear and front porches and five underpinning piles, three along the rear of the building and two on the side of the house.  Pigs Heaven was able to use an excavator outside to achieve 5,000 foot-pounds on

his Marian Digital torque indicator and the 12-ton ultimate.  “Typical mixed bag residential job,” explained Dave Grahn of Pigs Heaven: “lots of moving parts, but we got it done.  There are many sensitivities when you’re working in a neighborhood, especially with dewatering.  We try to fly under the radar screen and clean up the site each night,” he continued. 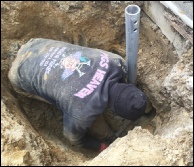 “Inside work is always tricky.  However, building the ramp and pulling the slider allowed us to avoid hand-held, which improved our cost effectiveness on the job,” Dave observed.  “The five footers sped the work, and you can put a lot of torque on IDEAL 2 7/8”.203 wall and both of those things helped us to remain competitive on the job,” he concluded. 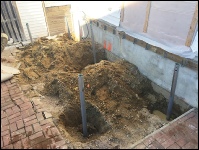 segmented helicals are the answer to limited access, restrictive overhead, and nervous neighbors.  More compact, versatile equipment choices and lighter, more powerful drive heads further mitigate access issues.  The expertise and resourcefulness of Danbro installers like Pigs Heaven make solutions for difficult residential site challenges achievable and affordable.  If you are a homeowner with foundation issues, the virtues of helicals, equipment innovations, and a good contractor form a perfect union.