The Economic Viability of Grouted Helical Micropiles: A Case Study

A new five-story, 32-unit, multi-dwelling building was recently constructed on an empty lot overlooking the Neponset River in Quincy, Massachusetts.  Due to poor subsurface soil conditions, a deep foundation, consisting of one hundred and twenty-nine 80 KIP piles, was necessary.  Initially, ductile iron pipe piles and geo piers were considered for the project, and several contractors provided installed prices for each respective option.  In addition, a few other foundation contractors provided helical pile pricing as an alternative.  The owner had a successful on-going relationship with Keash, a local excavation contractor who installs IDEAL brand helical piles, and he wanted to see them get the work if helicals proved to be a viable option. Keash reached out to Danbro in June, 2019 to see if they could recommend a helical solution. 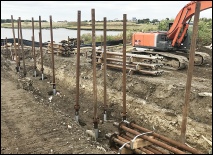 Danbro’s engineer recommended (129) 8.625” helical pipe piles installed to 50 feet, requiring 20,000-foot pounds of torque and filled with 4 ksi grout to support the 80 KIP load. The necessity for the large diameter piles was to address lateral issues in the weight of hammer (WHO) soils and to eliminate buckling concerns.  The price tag for the material alone was close to half a million dollars, not including the drive head upgrade that would run close to an additional $50,000.  The contractor and owner were looking for an in-house solution, utilizing existing equipment, and a cost-saving solution to geo piers or pipe piles.  The first recommendation wasn’t going to cut it. 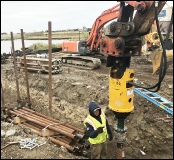 At that point, the installation contractor reached out to Danbro looking for another solution with the above two goals in mind. Danbro initially suggested a 1.75” square shaft helical with an uncased 10” grout column and a load test to confirm capacity and lateral viability in the WOH soils.  However, buckling concerns with the slender square shaft remained an issue. Danbro then came up with a third alternative, utilizing the same size grout column, but with a 3.5”.300 wall helical pipe pile which would offer more lateral stability than the 1.75” SS material.  In addition, Danbro proposed a load test to confirm that this pile could achieve capacity and alleviate design concerns.  Discussion ensued with the installer, owner, and the owner’s geotech and structural engineers.  It was made clear that as long as the pile did not plunge during the load test, it would establish that the pile would not buckle in the soil, and this type of deep foundation would be deemed acceptable.  Danbro began fabricating the digger plates and, in a few short days Danbro was on site installing the test pile and the reaction piles.  The test pile was installed to the necessary torque and the grout took very well in the soils.  Seven days later, Danbro was back on site to do the load test after letting the cement cure.  The pile was tested to 80 kips and performed exceptionally well as it moved less than 3/8 of an i

Once it was established that this pile would work, all (129) piles were ordered.  To speed the installation, IDEAL agreed to fabricate the lead section and extensions with the 10” displacement plates welded to the pipe.  This tale has a good ending, but not a perfect one.  It turned out a lot of the piles spun out on the till and did not get the required torque. This was a major concern for the structural and geotechnical engineers.  Danbro once again returned to the site and tested one of the “spin out” piles, choosing the worst-case pile with the shortest depth and lowest torque values.  This pile also tested flawlessly.  The engineers of record were comfortable with the results of the second load test that confirmed that the friction from the grout column alone provided enough capacity regardless of depth or torque.

ltimately persistence paid off. The owner got his preferred contractor, and the grouted helical micropile tested well both times and satisfied the engineers of record.  In addition, the overarching goal of an economical foundation solution was achieved.  The material cost for 3.5” grouted piles was $43/LF vs. $69/LF for 8” helical piles (including the two load tests).  The grout cost (assuming each pile took 20 bags and the bags are $15 each) was approximately $32,895.  Thus, the grouted helical micropile saved $300,000 over the large diameter pile initially proposed by utilizing grout (a less expensive material) and a less expensive smaller diameter helical.

As this project clearly demonstrates, a grouted helical micropile not only alleviates site concerns like corrosion, buckling, and lateral, but can also be a significant cost saver.