When Phil Scheid of Levelift Foundations, LLC won the contract for the Terwilliger Center at the Naval Academy over 14 other bidders, he blinked. “You always second guess yourself in a situation like this,” joked Scheid: “What did I miss?” Scheid had reason for concern.  The 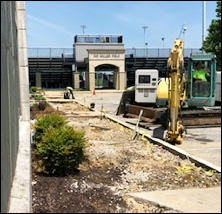 Academy decided to add a second floor to the Terwilliger Center, the training center for the football team.  Many of the troublesome site conditions that caused structural engineers Baker Ingram to specify helical piles were at issue.  Access was limited with low overhead.  Small, low-impact equipment was required, and the cage for the Yanmar V 35 excavator needed to be removed to squeeze into the facility.  Vibration was verboten.  There could be no compromise to the existing foundation and no spoils from the Chesapeake Bay mud used as the original fill for the site.

“Production was the key,” stated Scheid.  “We knew we couldn’t move fast with all the site restrictions, and the Naval Academy wanted us off-site before and during Commission Week with all of the accompanying ceremonies and visitors.  At one point, the GC - Manhattan Construction, complained we were getting ahead of their schedule and wanted us to slow down,” said Scheid. Fortunately, Levelift is a local contractor and mobilizations and demobilizations are not the costly impediment with helicals that they are with other piling systems. 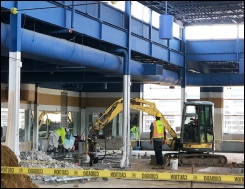 Levelift made the most of their installation opportunities by having one crew work outside, along the perimeter of the building, while engaging two crews inside the facility for restricted access interior work.  (198) piles were originally specified, but redesigns pushed the total to (212)piles.  2.875” .203” wall pipe piles, grout filled to combat corrosion concerns, were installed to 70’ and 7,000 ft. lbs. of torque to achieve the 70 kip ultimate capacity.  Three helical piles per pile cap were installed to support the new columns, which in turn would support the new second level. 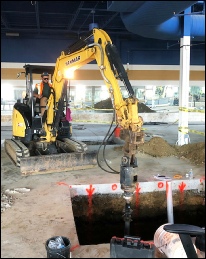 Scheid also cited Danbro Distributor’s assistance in successfully completing the project.  “Frank (Frank D’Angelo, Danbro’s president) was considerate of our on again/off again crazy schedule and sent Nick Gill, Danbro’s site support specialist, the first week to get us off to a good start.  I really appreciate Danbro’s consideration and support.”

Frank D’Angelo also cited the economic advantage that the helical manufacturer, IDEAL Foundation Products, brought to the equation.  “We get 7,000 ft. lbs. of torque and 70 kips with IDEAL’s .203” wall product.  Most manufacturers have to bump you up to .276” wall to get the equivalent torque and capacity,” D’Angelo stated.  “That translates into a tremendous economic advantage when you are bidding a (200) pile job.  Other bidders using competitive brands can’t compete.  Levelift, Danbro, and IDEAL make a great team and tough competition,” D’Angelo concluded. 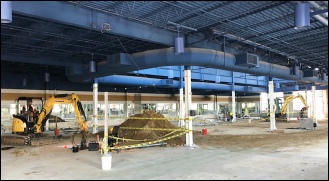