Levelift Foundations, LLC has been a significant player in the foundation business in the Baltimore/D.C. Metro area since ­2014.  Varying soil conditions, lots of water, and crowded suburban and urban environments have made helicals a logical choice for foundation work in this area. The helical market has grown over time with increased recognition and acceptance by the professional community and Levelift grew with expanded applications and more work.

’t really take center stage: they support it and resist uplift from the large tent erected on the lawn of the Capitol.  https://www.danbro.com/?s=Levelift

According to the Small Business Administration, construction companies are among the toughest businesses to manage, as their extremely high failure rate suggests. While 75% manage to survive their first year, the majority can’t seem to push past the five-year mark. Levelift is well ahead of the curve.  Among the many reasons that small businesses fail, even those with some years behind them, is the death of the founder or the critical leader.  Levelift Systems, Inc. (LSI) was founded by Paul Mauer in 1991 and ceased all business operations following his tragic death in 2014.  Enter Phil Schied stage right.  Phil, a Virginia Military Institute graduate and a Ph.D. with a Civil Engineering degree, had consulted for Levelift Systems, Inc. since 1997 and eventually  became a full-time employee of LSI in 2005, helping the helical business evolve by conducting countless lunch-and-learns with the design community and providing design and engineering support services to LSI.  “When Paul died, he left a void in the Baltimore-Washington construction market.  I believed that I had a good understanding of the business from the helical 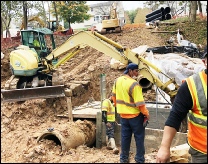 engineering standpoint, so I made the decision to pick up the pieces remaining of LSI and start something new, Levelift Foundations, LLC,” Phil stated.  However, running a business is more complicated than just understanding one aspect of the equation well.  One has to keep a lot of balls in the air at one time and that includes managing personnel, which is essential in the construction industry.

In May, Levelift needed a new field supervisor. The last one lasted two days before announcing he didn’t like to get dirty.  Phil advertised the position again.  He was looking for a young engineer, fresh out of college, looking for that first job.  Some construction experience was preferred, but not mandatory.  Then came an unexpected call

from Zoe Broadway, a May 2020 U.S. Naval Academy graduate.  Due to a medical condition, Zoe learned she would be one of only nine graduates who would not be commissioned.  Her expected career path unexpectedly short-circuited, she set her sights on other opportunities: Levelift’s field supervisor position beckoned!  Engineering courses were part of the curriculum at the Naval Academy and she had earned her construction stripes working alongside her father when he built a new home.  More importantly, she had the leadership skills that she would need to effectively work as a field supervisor.  It is not every day that a woman, a graduate of the Naval Academy with a degree in Mandarin Chinese, applies for a job with Levelift.  Fortunately for Levelift, that day did come to pass and that is when Phil Schied discovered that he and Zoe Broadway both graduated from military institutions.

“Certainly, her education at Annapolis and my similar experience at VMI played into my decision to hire Zoe,” stated Phil.  “A military education is a demanding, multi-discipline, rigorous exercise that develops character and leadership skills.  You can learn the intricacies of helical installations, but character and a solid work ethic are harder to come by.  Hiring Zoe was an opportunity to add a demonstrated leader to our team,” Phil explained.

ar appointment to the Naval Academy (only 9% of applicants are accepted) helped her develop the skills and the discipline to forge her own path in life.  Among her achievements, she held leadership positions, managing plebes, and she was appointed Honor Officer in her senior year.

Zoe applies the military’s focus on team building with her team. “Each day, we have a brief meeting before we depart by reviewing the job packet and checking to make sure we have everything we will need on-site,” she said. “Then I check with Geobanni, our senior operator, to make sure I haven’t missed anything.”

Zoe’s military experience also comes in handy on-site.  Logistics and chain of command are not only critical on the battlefield, but also important on the job. “I always seek out the GC, if on-site, or the owner, if residential, introduce myself and Levelift, and explain our plan and process.”  Logistics come into play when multiple subs are on site and jockeying for position to determine whose work takes precedence.  Spoiler alert: “The other subs alwa

ys believe the speedy, unencumbered completion of their work is tantamount to the achievement of world peace,” she joked.

As the only woman in the trenches, she holds her own and leads by example, observing, “I’m respectful and it usually gets results.”  Nonetheless, after a tough day on the job involving some turf battles, Zoe has a running joke that she doesn’t share on-site.  “That’s why they call them ‘man-hours,’” Zoe quipped, “because it would only take a woman twenty minutes!”

Zoe appreciates and enjoys the opportunities and challenges of her work as a field supervisor.  She brings competence, a sense of humor, and a fresh perspective to her responsibilities, cognizant that her presence at these projects opens the door to the wonderful world of helicals for other women too!