Solar power cell technology was invented in 1839 by French physicist Edmond Becquerel when he discovered the photovoltaic effect while experimenting with a cell made of metal electrodes in a conducting solution.  He noted that the cell produced more electricity when it was exposed to light.

In 1941, shortly after the invention of the transistor, Russell Ohl invented the solar cell.  Other technological advances and production capabilities followed throughout the years and into the 21st century when the practicality and economics of solar panels caught up with the science.  In the 1970s, during the oil embargo, the federal government funded solar energy research, provided tax incentives, and invested in solar for government buildings.  Tax credits, research, and government solar investments extended into the 80s, 90s, and early 2000s.  The American Recovery and Reinvestment Act of 2009, otherwise known as the federal stimulus, extended massive new subsidies to the solar industry.  This spurred solar power investment at every level from utility authorities down to individual homeowners and has made the use of solar power more widespread.

One very useful characteristic of solar photovoltaic power generation is that any scale of installation is possible.  Most conventional forms of power generation require major investment in large scale plants and the accompanying workforce and maintenance cost.  Not so with solar, which is why helicals, a minimally invasive installation method, often make a lot of sense for solar arrays.  Danbro and its partners have worked on a variety of residential, commercial, and industrial solar projects over the past 10 years. The work continues as the popularity of solar technology is undiminished.

Recently, Richmond Septic and Excavation, aided and supported by Nick Gill from Danbro, installed fourteen IDEAL 2 7/8” helical pipe piles to support seven solar panels for a homeowner in Plymouth, MA.  Compare the scope of this project to the 13,000 6” pipe piles used at Brookhaven National Labs in Upton, NY, nine years earlier.  Whether you are a homeowner trying to provide energy for your property or the Long Island Power Authority reducing carbon emissions by 30,000 metric tons while creating a new power supply to accommodate 4,500 homeowners, helicals can be part of the equation. 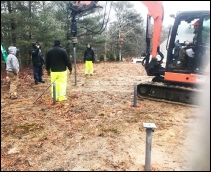 The history of helical piles as solar panel supports is as varied as the aforementioned projects.  Helical piles for solar panels are site and soil specific.  In the right conditions, they are a cost-effective alternative to pipe/concrete or H-Piles.  Productivity is the key, based on the speed of installation, immediate loading, and the mitigation of access and mobilization issues.  Environmental sensitivity is also a major factor in choosing helical piles for solar arrays.

The Flockton residence solar panels are a perfect example of when helicals make sense and cents.  Concrete piers with pipe were originally considered, but the frozen turf was going to slow the installation and the cement was going to create more of a mess than Jeff Flockton wanted to endure.  The helical piles only needed to go 9’ to achieve the 10-ton load, so the shallow depth, speed of install, and elimination of post-production clean-up made this an easy decision.

On-site support and assistance for a novice installer cinched the deal and ensured that the project went off without a hitch.   “Nick Gill did a helical install for my solar field last month and did an awesome job!!!  Thanks again for top notch work and service! Will definitely use again,” wrote homeowner Jeff Flockton in a follow-up note of appreciation.

At Brookhaven, the size of the site (200 acres), varying soil

conditions, minimally invasive equipment, and environmental sensitivity, all played into the BP Solar and the Long Island Power Authority decision to use helical piers.  “The decision to use helicals is still on a case-by-case basis,” said Frank D’Angelo, Danbro President.  “As in every prospective helical project, It depends on site conditions, mobilization, soil, and environmental concerns.  They’re still a solid choice for a lot of solar projects,” he concluded.