Helical installers come to their calling in various and sundry ways. Necessity, opportunity, natural progression, and dumb luck have played a role for many.  In the case of Danbro Installer, Steve Vaspoli, he was recruited twenty two years ago by Danbro President Frank D’Angelo. “We had a business relationship,” stated Vaspoli.  “I was a known commodity.  Residential underpinning was the thing back then, and I was and am a home builder.  Frank convinced me that this would be a natural expansion of my business. I saw it as a side business, a complement to my general contracting work.

It wasn’t a plan, but helicals took off over the years and now represent about 50% of my business,” he continued.  “They eliminate or mitigate a lot of site issues and, as a contractor, I recognized what a big deal that was.”

A few notable recent jobs illustrate the reason why helical piles have become an integral part of Vaspoli Builders repertoire.  A residential pool, an underpinning project, a Wastewater Treatment Plant, and a housing development all illustrate the virtues of helicals that have resulted in their increased popularity.

In Mount Holly, N.J., helicals were specified to support and anchor a large pool in the backyard of a new home.  The residence was in Phase II of production with electricians, drywallers, masons, and trimmers all on site.  Helicals are trade friendly, allowing the other subs to get their work done without interference from the pool guys.  “Nearby neighbors also benefited from the low noise/no vibration install,” Vaspoli noted. In Philadelphia, PA, a deep excavation in a lot required the support of an adjacent building.  The excavator was required to wait for the underpinning to be completed first and conventional, segmented concrete piering would take time and patience.  Time, tide, and helicals wait for no man, and the excavation proceeded, without delay, after a quick install.

At the Gloucester City, N.J. Wastewater Treatment Plant, there was no competition with other Trades for space 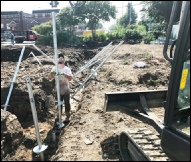 and time. The competition was the limitation of the facility and busy plant personnel who needed to continue to get their work done while Vaspoli was doing his.  In addition to being trade and neighbor friendly, helicals can often be installed in fully operational facilities. “Government and quasi-public operations, energy, or utilities often cannot shut down their whole operation,” Vaspoli observed.

The 20th Street Development project in Philadelphia, PA was very representative of the conditions that have driven Vaspoli Builders’ business in urban environments.  For example, they had to pre-drill the first eight feet due to urban fill.  As Vaspoli noted: “over the years, the usual suspects – access, mobilization, no-vibration, urban fill - all led to a lot of work in the city.  Low noise, no-vibration, environmentally sensitive and neighbor-friendly are all big advantages with helicals.”

Steve Vaspoli has witnessed significant changes and innovations over his more than twenty-two-year helical career.  “The pre-drill, higher capacity piles, and the Grouted Helical Micropile are among the most significant advances.  I started back in ’99 with DeMaio putting in grouted

helicals for the environmental remediation business in New Jersey.  The Grouted Helical Micropile really changed the equation because it negated the disadvantages with helicals, while retaining all the advantages,” he stated.  “Additionally, in the equipment arena, the digital torque indicators were a great innovation.  The shear pin indicator was problematic and could really slow things down on some jobs,” Vaspoli tactfully observed.

“I made the right decision years ago when I got into the helical install business,” Vaspoli observed. “In today’s crowded, environmentally-sensitive, highly-regulated construction field, helicals can be real problem solvers and, as every contractor knows, there are lots of obstacles to overcome on any given site,” he concluded.  Danbro’s Frank D’Angelo agreed: “It worked out well for both of us.  You need a good product (Danbro reps IDEAL Foundation Products), but ultimately, the installer, the last link in the chain, is the most important element for success in the helical biz!  We have been very fortunate to have Vaspoli Builders in the fold.”