When Bill Bonekemper conceptualized this first-of-a-kind event for the helical pile industry, live load testing of helical piles was one of the important components in his mind.  His first phone call on the topic was with CTL Thompson’s Wayne Thompson to expose the idea and try to determine that something like this could be done well at a live event.  Wayne replied - “absolutely a great idea, and yes we can do this.”

And so the planning efforts began about one year ahead of the event dates.  Wayne knew right away he would be bringing his two senior engineers who have countless hours of experience with static load testing with him - Chip Leadbetter and Ryan Beck

The number of volunteers needed for this effort went well beyond the CTL team and included:

And how did all of this planning and hard work pan out -   STUPENDOUSLY!

Creative ideas are one thing - executing them to perfection takes excellent efforts by highly qualified people.

And when all the hard work was over - some unwinding, some laughs, a couple of  cold brews and a great burger meal was enjoyed by some team members at Bones’ Burgers - a Cincinnati favorite. 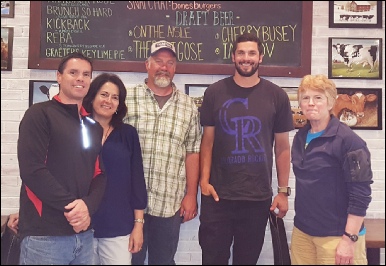 A Great BIG Thanks Goes to the Entire Team!