Whether you are trying to build in the dense rock of Charleston, West Virginia or Denver, Colorado or if you are encountering permafrost in Alaska or Canada, you have probably encountered tougher-than-most soil conditions, making it nearly impossible to install the deep foundation that would give your building project the best start.

Dense, rocky, high blow count, and permafrost soils can pose problems when installing a standard helical pile, a tested, proven, and widely accepted deep foundation solution. Installers were finding that some conditions required pre-drilling a pilot hole in order to complete a job 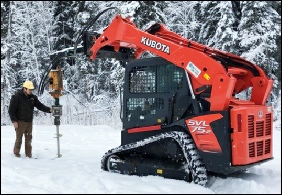 . Unexpected obstructions were also known to slow down installation, and CHANCE® engineers, the leaders in helical pile technology, worked to find a solution.

Their research led them to the solution of a welded carbide tip designed to break through even the toughest conditions. To be sure, they field tested the design in the caliche soil, which has a natural cement-like consistency, of the Atacama Desert of Chile.

A backhoe was brought in to test the hardness of the soil, but the operator was only able to dig a shallow hole, a little over a foot deep in the caliche, before abandoning the effort.

The standard, square shaft helical pile also failed to penetrate the caliche. Finally, after these two (anticipated) failures, the ROCK-IT 3-helix (6-8-10) square shaft pile was ready to be tested. The

ROCK-IT lead section successfully penetrated the extremely dense, rock-like surface soils. Additionally, it was backed out and the same pile was able to be reinstalled in multiple locations throughout the testing.

Since the initial, successful field testing the ROCK-IT lead section has been used and proven in helical pile applications around the world. According to Tim Ashenbrener of Dynamic Helical Systems, a CHANCE distributor in Homer, Alaska, “The ROCK-IT lead sections have allowed us to use helical foundations where we would otherwise not be able to due to permafrost conditions. This product is able to effectively penetrate through the frozen soil to significant depths without the need to predrill a pilot hole which is costly and time consuming.”