In 2016 HPW published an article about the results of our initial survey on the average prices in the U.S. for installed 20’ deep helical piles for two applications - new construction piles and remedial/foundation repair piles.  Earlier this year we received an email from a contractor who suggested the prices reported in that  article should be reviewed as he suggested that prices have risen since then - at least in his neck of the woods.

Eager to determine if this contractor’s suggestion or opinion was correct, HPW again began reaching out to contractors, manufacturers, and distributors to gather pricing information.  The prices we gathered were acquired from (17) entities representing (5) regions.  HPW asked for average installed pile prices for the following:

HPW organized the participants by (5) geographic regions in the U.S. – Northeast and Mid-Atlantic, South and Southeast, Midwest and Plains, West and Southwest and Northwest.  The following numbers represent the averages of the prices gathered for each region and the numbers were rounded to the nearest $10.

Note:  All companies reinforced the point that these prices for remedial work are for a typical residential project.  Commercial projects or projects with challenging sites would probably be priced higher.

So, HPW wants to thank the contractor that alerted us to his opinion that prices have risen since 2016 because he is certainly correct.  As you can see, every region has seen an increase, and a few have seen quite a jump. 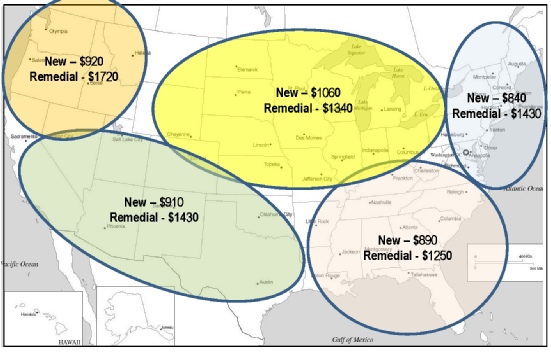