Ram Jack West Installs (4) Helical Piles to Support the Hammer Throwing Cage at Hayward Field in Eugene, OR for the World Athletics Championships

The World Athletics Championships 2022 were held at the Hayward Field in Eugene, Oregon. Getting everything set up for the events were challenging but one, in particular, held a unique problem. The contractor who was in charge of putting up the hammer throw cage was having a hard time figuring out a way to get something in the ground that would hold the towers of the cage. They would usually use concrete blocks and then tie the concrete blocks to the towers but since it was The World Athletics Championships, they didn’t want huge concrete blocks sticking up in the middle of Hayward Field.

When they built the track, they excavated the infield, placed 3 ft of compacted rock, then fabric, then sand, then the turf. The contractor first tried to screw in small anchors by hand, but he was unsuccessful because he couldn’t get through the rock.

That’s where Ram Jack came in. Ram Jack West walked a mini excavator onto the infield and installed (4) helicals as an alternative to tearing up the turf and placing concrete deadmen underneath it. The helicals were then used by the contactor to attach guide wires to support the towers and hold the net in place. 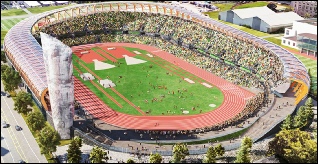 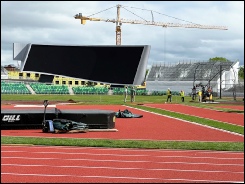 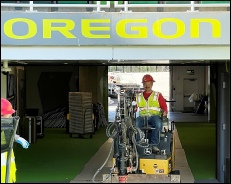 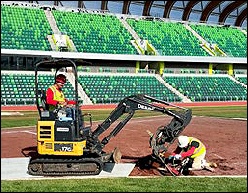 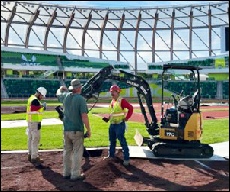 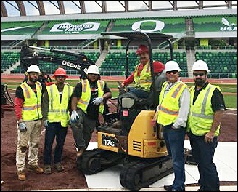