What is Foundation Settlement?

Whether a structure has been newly built, or it has been standing for nearly 100 years, all buildings – from houses to businesses – can experience foundation settlement.

Foundation settlement can happen for several reasons, but they all typically have something in common – the soil under and around a building. When the soil fails – whether from erosion, shrinking, expanding, or poor compaction – the foundation fails. Homeowners will begin to see signs of settlement in the form of various cracks throughout the home, uneven floors, sticking windows and doors, and more.

It is crucial to keep an eye out for potential settlement and address it as soon as possible with effective repair solutions.

Longtime homeowners in Lynchburg, VA, noticed several signs of foundation settlement including gaps around windows and doors, and vertical and horizontal cracking on exterior walls. The front porch also had a lengthy crack in it, and it seemed to be uneven.

The owners knew they needed to remedy these problems before serious damage occurred. Seeing TV ads for JES Foundation Repair prompted them to contact the company for further assistance, and they scheduled a free foundation inspection and repair estimate.

One of the company’s certified field inspectors visited the property to assess the foundation of the 119-year-old house for damage and recommend the best course of action for repair. Along with finding the same problem signs as the homeowners, the inspector also measured up to 4” of settlement around the back of the home. He also noted that visible concrete piles used in the construction of the walls and around the footing were failing to support several areas.

Concrete piles are ineffective construction and repair methods. They can easily crack and break when under pressure, especially on older homes, and even in response to temperature changes. A more reliable alternative used today is helical piles that are installed past unstable soils and down to more stable load-bearing strata.

The JES inspector recommended seven helical piles be installed underneath the problematic settling sections of the foundation. The homeowners agreed to proceed with the work, and an installation crew from the company’s Appomattox branch completed the project.

The crew first began by excavating around the three settling walls where the piles were going to be installed. They then dug down 2’ to expose the footing. Each pile was then advanced deep into the soil. The amount of torque used to install each pile was carefully monitored, which allowed the crew to get past unstable soils. The piles were installed to depths of approximately 20’ down to more stable soil to better support the structure.

Due to the home’s age and the condition of the footing, sections of galvanized steel support beams were cut and placed between each pile’s foundation bracket and the bottom of the footing. This helped further support the footing and the building.

Additionally, three IntelliJack™ stabilizers were placed in the hollow, open area beneath the cracking, uneven front porch to reinforce and help lift this area of the home.

During the project, the crew had to contend with groundhogs and their holes around the property, minimal access under the porch for installing the IntelliJacks™, and rewiring projects around the house. But this stabilization project was successfully completed in three working days to the homeowners’ satisfaction.

The home has been permanently stabilized and protected from further foundation settlement in the areas where the piles and support jacks were installed, giving the homeowners peace of mind and a safer living environment. 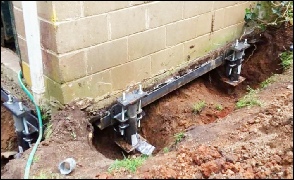 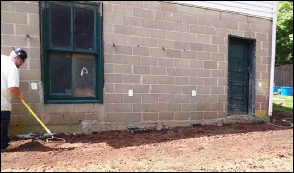