East Side, West Side All Around the Town,

Happy Folks are Singing: “Got Helicals in the Ground!”

I have always encouraged our installers to create a presence for themselves on site. Post a sign with contact information or park your vehicles in a prominent place in clear view of passers-by. I also 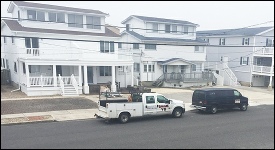 recommend they be a “good” temporary neighbor and run a clean site, minimizing construction annoyances. In addition to fostering positive neighborly relations, there is a sound reason for these practices.  If one homeowner on the block needs to raise their home out of the flood plain or is experiencing foundation settlement, there is a good chance that other residences in the neighborhood will have similar issues that will need to be addressed.

This was the case at 330 West 39th Street in Sea Isle City, NJ. Two years earlier, 330 East had to address a crumbling timber foundation which was causing their own foundation settlement issues. That repair was documented i

n a story in the January 2021 issue of HPW (click here to read).  These two properties (designated as side-by-sides) share the same lot and building, partitioned by a fire wall, and featuring the same dimensions and layout. The original pilings on both sides were so completely rotted that they had turned to mush. The doors and windows were sticking, and step cracks were visible on the foundation wall. This section of the town is on a marsh mat and all the neighboring properties are on pilings as well.

Vaspoli of Vaspoli Builders to the owner because they have worked together frequently in the past and there was a familiarity and comfort level.  Vaspoli, one of Danbro’s original, most experienced, and versatile installers for more than two decades primarily works on commercial projects.  Click here for Vaspoli Case Studies

Many of the normal challenges for an underpinning project were in play. Side and backyard setbacks were tight, and his commercial-focused equipment could not access the 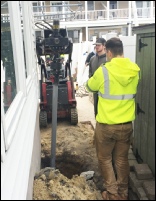 site. This was solved by renting a Dingo, mounted with a 5K drivehead and a Pro-Dig digital torque indicator. The high-water table required dewatering, especially in the back yard, which also featured a small pool, further restricting access. In addition, a roof extension bumped out from the building’s second floor to shade a patio off the rear of the first floor. This caused overhead restrictions and extra caution was needed with the underpinning piles in the rear yard. The pilot point for the piles needed to be excavated to get down to the footer, thus allowing just enough clearance to use 5’ leads and extensions. 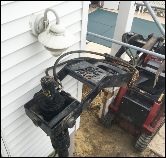 While the side wall piles produced less water, they were in a narrow alleyway and even the Dingo was challenged in this tight space. Five underpinning piles with brackets were installed on the side wall, while four were installed in the rear.  IDEAL 2 7/8” pipe piles [.203 wall] with True Force underpinning brackets were used just as they were used on the East side in December of 2020.  Little torque was generated through WOH material until a hard dead pan sand layer and refusal was achieved at 35’.

This project was a return to the same scene with similar challenges crying out for a helical fix in a neighborhood with deteriorating timber piles and weight of hammer soils.

Both neighbors addressed their problems using different engineers who hired different contractors. The one common denominator is that a neighbor-friendly, non-intrusive, access-mitigating repair was achieved by using helical piles.  In neighborhoods with similar conditions – i.e., lousy soils, tight access, flood prone, or high-water tables - high visibility and word of mouth are the best form of advertising.  As I remind our installers, take advantage of every job to help land another job. That is why, East side, West side, all around the town, folks with settlement issues are singing: “Got helicals in the ground!”