Murphy’s Law states that anything that can go wrong will go wrong.  As many contractors have learned on certain troubled jobs, Murphy was an optimist!  This was the situation for Dave Grahn from Pigs Heaven on a recent residential project in

Ocean City, New Jersey. “We couldn’t catch a break,” said Kevin, Dave’s right-hand man.  “It was one thing after another and, of course, we were up against a deadline.”

The project in question was a house lift to raise a home out of the flood zone.  FEMA is still providing assistance to homeowners who want to get their properties in

compliance with newly-established Base Flood Elevations.  State programs in hard-hit Super Storm Sandy states like NJ and NY have pretty much dried up, but federal help is still available, and compliance helps to reduce your insurance rate.

Many of the normal challenges existed on the site.  The owners’ Engineer wanted to utilize existing timber piles to reduce the number of helical piles, but the original timber had not been driven deep enough, so helicals needed to be screwed in close 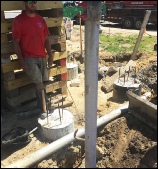 proximity to existing pile caps.  This forced the cribbing to be erected around the existing piles, causing even more restricted access than normal.  Overhead also came into play: only 10’ extensions were available, and the cribbing was only 12’ high.  This forced Pigs Heaven to use additional equipment to get in between the cribbing to excavate pile locations, so they could deal with height restrictions.  The installing equipment could reach in to install the leads and extensions, but could not get in close enough to excavate the pile hole locations.  Dewatering equipment (Water Table-40”) and some inclement weather further cluttered the site while complicating excavations.

The 3.5” pipe piles originally specified for the job were out of stock and the foundations had to be completed so the house lifter, followed by the GC, could get in and complete their work before the summer season began.  Danbro Distributors provided 4.5” IDEAL pipe piles, but only had 10’ extensions and the piles were going deeper than anticipated.  Pigs Heaven ran out of material with only a couple of piles to go.  Fortunately, they had saved porch piles for last, and Bob Green, the engineer of record, allowed the installer to utilize 2 7/8” leads transitioning to 4.5” extensions to complete the job.  The porch loads were a quarter of the house loads.  However, this required a last-minute run to their yard to weld the smaller leads to larger diameter extensions in order to finish the install as the pour was scheduled for the following morning.

Dave Grahn, the owner of Pigs Heaven, was

philosophical about the constant challenges on this project. “Piles for house lifts can be problematic,” Dave stated.  “You have a GC and a bunch of subs, one following the other.  Timing is critical especially when the homeowner wants to get in quickly to maximize the season.  The summer deadline is always a factor on these barrier islands,” he continued, “and the virus restrictions further complicated things and slowed everybody down.  The mason had a pour the next day, so we had to finish the pile work and get out of there so everyone else could get their work done.”

Dave has been a Danbro/IDEAL installer for years and has extensive experience with house lifts and other time-sensitive/access-challenged work in flood zones. “If we’re not slopping around in the muck, we’re not having any fun,” Grahn sarcastically observed.  “Why do you think we call it “Pigs Heaven?”