Many of the articles in HPW about specific helical projects, including all that I have written, speak to a compelling reason or issue that drove the decision to use helicals for the deep foundation element.  Site issues or environmental sensitivity of some sort usually drive the decision.  At Tavo Packaging, several of the usual suspects were at play.  However, it was not merely the ability of the helical design to overcome some

common obstacles that carried the day; rather, it was a very specific Load Test with some very stringent settlement criteria that sealed the deal.

Tavo Packaging produces packaging, primarily for the food industry. The facility cuts and prints boxes of all different sizes and shapes for their clientele.  Examples of their product are individual boxes for pizza slices, Dunkin Donut’s dozen box, and KFC’s family pack.  Two vital pieces of equipment in their manufacturing process are the printing press that imprints the 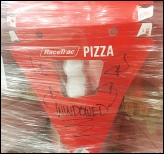 messaging and the Box Cutters that cut the individual boxes to the correct dimensions.  Each of these machines has rotating cylinders that create a great deal of dynamic vibration when in operation.  This condition required very stringent settlement criteria.  The printing press, in particular, required no more than four tenths of an inch settlement on the foundation piles, according to the German manufacturer Koenig & Bauer.  A load test was required to assure that the piles could meet the requirement. 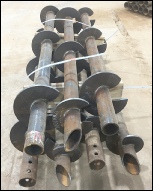 Another frequent issue for many projects, helical or otherwise, is time constraints.  Other deep foundation options for Tavo failed to meet access requirements and created more dust and vibration than a fully operational plant could tolerate.  According to Steven Rapacioli of Rapacioli Construction Corporation, the foundation contractor, the printing press was in the middle of the Atlantic Ocean when, for one reason after another, more traditional foundation piles were eliminated, and an alternate deep foundation element needed to be found and tested.  The press, t

he size of an ocean transport barge, would have to be stored, at considerable cost, if it arrived in Newark, NJ and the foundation was not ready.  Additionally, committed orders could not be filled by Tavo, costing them business and, worse yet, possibly some big customers.  Enter Steve Gencorelli, P.E., a structural engineer specializing in helical designs.

The original pile design called for a 2 7/8”.276 pipe pile for the 40 kip load.  Gencorelli has been preparing helical designs for over a decade and has thousands to his credit.  He recognized immediately that he needed to design for the load test criteria and not the load.  2 7/8” wasn’t going to cut it and time constraints, press storage cost, and plant operational delays would easily supersede the cost of a helical upgrade.  Gencorelli increased the load to 50 kips to account for settlement and dynamic loading. However, load test themselves are costly and take time.  The contractor, Structural Engineer (Michael A Beach Consulting), Pile Inspector (Engineering Consulting Services), and Tavo needed assurances, quickly. Gencorelli understood the gravity of the situation. The principals needed answers, yesterday. 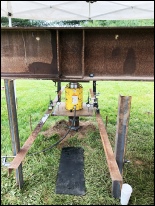 Gencorelli ran a software program which confirmed his original conclusion regarding the 2 7/8” pipe pile.  An IDEAL 5.5”.36 wall with a 14”16”18” helical configuration with a three-bolt connection would meet or exceed the settlement criteria.  The load test (ASTM D 1143 – 20) was used as it is a procedure that captures cyclical dynamic action.  The test was performed outside the building to speed the set-up, but as near as possible to the site of the structural slab that would support the press.  Those unfamiliar with helicals and Gencorelli’s work were still nervous, but the pile registered .28 of an inch settlement, easily clearing the .4 limit.  Click to see Tavo Packaging Load Test

The project proceeded with the installation of (38) 5 1/2” piles (29,000 ft. lbs of torque) to less than 20’ feet by experienced Danbro veteran installer, Vaspoli Builders.  A minimal depth of 11’ was required for the 2-kip lateral load. 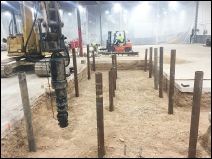 The piles were grout filled to reduce the surface area for possible corrosion.  The installation took less than four days. The two Dye cutters each required 20 helicals and both took a couple of days to install.  Steve Vaspooli observed: “funny thing, we were well over budget due to the much higher capacity piles and nobody blinked. That doesn’t happen very often.”  Click to see Tavo Packaging Install

Steve Rapacioli, among the happy campers, was relieved and impressed: “Low settlement tolerance 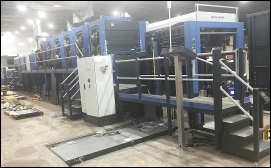 situations and specialized structural slabs are my specialty.  I have worked in forty-two states, but never used helicals before.  After this experience, I will be using them in the future!” The author, a former co-worker of Gencorelli, suggested to Mr. Rapacioli that he keep Steve G’s number on speed-dial.