f you were to list the top five virtues of helical piles and anchors, access and mobilization would be on every savvy helicalite’s list. New construction piles laid out 8’on center in a field for a housing development is a rare, but notable, exception. However, on most jobs that go helical, the space within which you must work and the equipment that can be utilized within that space are frequently at issue. This is particularly true for some applications and, as some of our installers are painfully aware, foundations for elevators fall into this category. 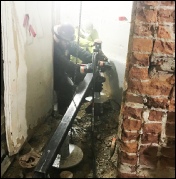 he case history from a settling seven-story Boston apartment building illustrates the challenges faced when working inside an existing structure to add an elevator. The 100-year-old structure had been settling for years. Mini piles were specified for the foundation fix, but there was no room to install them for the new elevator that was part of the renovation. When elevators need to be installed in existing buildings, your equipment options are often limited to portable hand-held equipment, consisting of a drive-head (with hoses attached to a remote power source), an extendable reaction bar, and a foot-pedal, which can be used to install helicals in as little as 3’ of headroom.  Over the years, Danbro installers have used the portable equipment on multiple elevator projects in the Philadelphia Navy Yard as existing buildings were converted from military to commercial spaces. Both square shaft and pipe piles have been used on elevator projects. In Boston, it was 3.5” pipe.  Click to see Hand-Held Application

Even when installers’ options are not 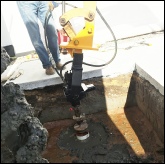 limited to the portable unit for elevators in existing structures, mobilization and access can still be a significant challenge. An Ocean City, MD elevator shaft pad had to be completed from a barge on the water, utilizing a marsh buggy with a 50’ arm to install the 1.75” square shaft

piles. Mobilization for the four piles took longer than the installation, including the pour for the concrete pad. Vibration was also an issue.  Click to see Waterfront Installation

In addition to mobilization, access, and vibration, nervous neighbors frequently come into play with this application. An apartment building in the Williamsburg section of Brooklyn was a rare exception where access and mobilization were not at issue. However, neighbors in very close proximity with a bird’s eye view of the site were on high alert and vibration was verboten!

A load test confirmed that IDEAL 4.5” pipe piles would achieve the 60 ton load. Thirty helicals were installed to varying depths between 65’and 85’ to support the oversized, commercial elevator shaft.  Click to see Commercial Elevator

Next door neighbors were also a major consideration with a residential installation on a crowded barrier island in New Jersey.   In addition to vibration concerns, limited access and the bearing capacity of suspect soils were at issue. The home was supported on timber piles, so the architect required a deep foundation for the elevator but wanted to spare the owners the cost of soil borings. A grouted helical micropile provided added stability and protection against buckling and corrosion. A cased 6” grout column was pulled down 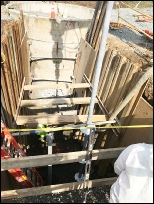 around 1 ½” square shaft extensions as a safety precaution to compensate for the lack of borings.   Click to see Residential Elevator

Access, mobilization, and no-vibration are frequently at issue with elevator shafts, pits, and pads. They are often only two to four pile installations, lightly loaded, and borings and/or a load test are often cost-prohibitive. A lack of soil information can be overcome with the torque to capacity reading and/or a grout column as an insurance policy. All these innate virtues of helical technology overcame site obstacles on the projects cited, confirming helical piles as the IDEAL solution for elevator foundation support.