Wedding Bells Ring Because Helicals And Their Installer Do Their Thing

Fred Wilson has been working in, on, and around the water all of his life.  Men, like Fred and his brother Bob, are referred to locally as “watermen” as they earn their living working at sea.  You name it and they have done it.  Every type of fishing from deep sea long-linin 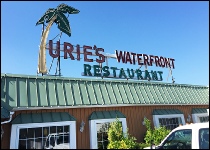 g to back bay clam digging and everything in between.  However, weather, fishing seasons, catch limits regulation, and more regulations cause downtime, interruptions, and fluctuations in this trade.  Early on, the Wilson brothers’ father recognized the need for more flexibility in the family business model to produce some extra cash flow when the fish weren’t running.  Ultimately, after many years of itinerant pile driving, dock building, and bulkhead work to fill the voids, FW Wilson Construction was formed and these watermen began working from a barge instead of a boat.

mong the first piling projects Fred Wilson , fresh out of school and now working with his dad, cut his teeth on was Urie’s Waterfront Restaurant in Wildwood, NJ.  Urie’s is a long-time dining institution in Wildwood, NJ (Cape May County).  Urie’s has been around for more than sixty-five years with several expansions and renovations to meet ever growing popularity and changing times.

The Wilsons’ initial involvement was with one of the earliest of the restaurants’ expansions, back in the early 70’s.  They drove pilings to support the wooden, boardwalk-like decking, which serves as the floor of the restaurant, which is located on the 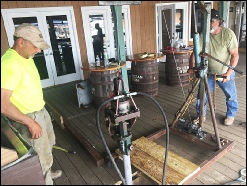 waterfront in the Wildwood Yacht Basin.  Forty-five years later, Fred, and his brother Bob, were back at the scene of the crime. This time it was not going to be as easy since there was no access to drive timber piles to replace the rotting timber below the existing structure.  FW Wilson Construction has been installing helicals for years, both as tiebacks for bulkheads and, in compression, when wood pilings were not an option. They have installed numerous new construction piles for house lifts post Super Storm Sandy.    Click to view Wilson house-lift

Used to working from underneath raised structures, even those

experiences could not prepare them for the recent Urie’s project.   Hyland Engineering quickly concurred with the viability of the helical option and did the design.  The decision to use helicals was a “no-brainer”. The execution would be another matter, involving a healthy dose of both brain and brawn.

Virtually every challenge a helical install can face was at issue on this job.  Access was severely limited, both overhead in the interior (in addition to tight spots) and underneath the boardwalk where the helical to bracket to floor joists connections took place.  All of the bracket connection work had to be done at low tide.  Mobilization involved running extended hose from an excavator in the parking lot to the front of the restaurant 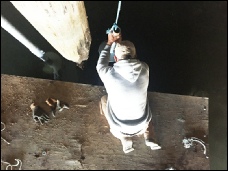 and from a barge on the waterfront side of the building to a specially rigged portable unit inside the building.  Only 2,500-foot pounds of torque was required for the 10-ton load, but more torque was needed to penetrate some random debris and obstructions spots.  Capable of up to 10,000 foot pounds of torque, IDEAL’s 2 7/8”.276 pipe pile also provided more sacrificial steel for the saltwater environment.

The ingenuity of helical installers like F W Wilson never ceases to impress. They purchased a used motor hoist and mounted it on a dolly, which they used to move the 9K drivehead (weighing 150 lbs) around from one pile location to another.  The torque bar was mounted to the floor at each pile location and a block & tackle pulley system manned by Bob and Tim addressed the counter force and kept t 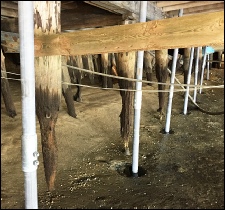 he helicals on-center. Helical leads and extensions were installed through trap doors cut in the floor at each pile location.  Later, during the bracket connection phase, tools, brackets, the last extension, and a PVC sleeve (both measured & cut to size) were passed down through the trapdoors to Bob Wilson working in the muck and mire below the boardwalk.  It was his job to install the brackets, make the connection to the floor joists, and snug the PVC down below the mudline. This phase of the install had to be completed at low tide, sometimes on a small raft.  Tim, above, would cut the extensions and PVC to size (after they were measured & marked) and pass them back down, along with the brackets and tools.

If all the above was not enough of a challenge, there also was a deadline involved.  Pat Di Antonio, Urie’s owner, had committed to a wedding on the weekend of 5/14/21.  Nothing like a little added pressure for a job from Hell!  Despite the numerous challenges, the deadline was met, the foundation secured, and the wedding when on without a hitch. 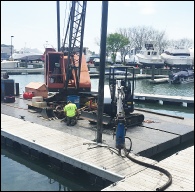 The F W Wilson team celebrated their minor miracle by planning for another challenging project across the bay at Lighthouse Point Marina.  This time they would need to install tiebacks about 60 feet deep, working from a barge, cutting through two existing older bulkheads, and avoiding the existing foundations for the condos bordering the bulkhead.  Forgive them if the Wilson crew was perhaps wistfully longing for those simple days at sea, only risking life and limb!