Making the Connection Work with All the Right Moves

There are many successful examples of helicals in tension for tie-downs and tiebacks:  small commercial and residential bulkheads; retaining walls; and basement walls anchored by helicals.  Like all helical solutions, they initially competed with more traditional app 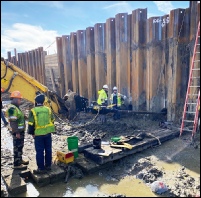 roaches, but ultimately found their niche and became increasingly popular. Over the years, helical anchors have made significant in-roads in the Transportation sector.  A successful history of using grouted tendons for sheeting on highways and bridge abutments formed a natural preference/bias for Federal, State, and various Authorities (and their contractors).  It is always easy to justify what you have specified in the past, but more difficult to suggest something new.

Our first introduction to helicals (before Danbro was formed) was in tension for an overpass in Wiggins Park for the Camden Waterfront Redevelopment project in 1991.  Our sister company, D’Angelo Brothers Inc., used them when Walter Smith, in his new role with Chance, got them specified by the Engineer and included in the bid documents.  That positive experience led us to recognize the virtue of helicals in this specific situation and encouraged us to explore helical technology further. 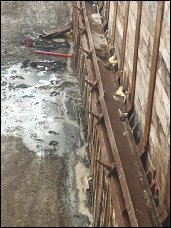 Ultimately, with the encouragement and guidance of Walter Smith, Danbro Distributors was born.  This experience taught us to never underestimate the helical option.  As a result, we have been successful over the years in recognizing situations where helical anchors make sense and cents.

A series of recent transportation/highway tiebacks for the New Jersey Department of Transportation's (NJDOT) I-295/I-76/Route 42 Interchange project illustrate the increasing recognition of the viability of helical anchors for earth retention on highways and bridges.

Direct Connect is a $900 Million dollar project, centered in Bellmawr, Camden County, New Jersey with the core intent to straighten out Route 295 and alleviate the very confusing interchange where I-295, Route 42, and Route 676 meet.  The project is designed to improve safety and reduce traffic congestion at the inte 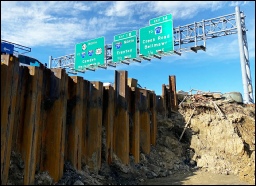 rsection of I-295, I-76, and Route 42.  Prior to the project, the interchange was one of the most congested roadways in New Jersey and it had a high rate of crashes.  It currently does not provide a direct connection for I-295 through-traffic.  The existing interchange requires motorists to reduce speed in both directions of I-295 to safely negotiate ramps with 35 mph speed limits.  Danbro has supplied material and technical assistance for all three phases of Direct Connect from 2017 to the present.

In conjunction, Missing Moves, a $180 million federally funded project, is building new ramps to connect Route 42 northbound to I-295 southbound, and I-295 northbound to Route 42 southbound in order to allow for the direct movement of traffic between the two roadways.  These are commonly known as the “missing moves.”

Darbro supplied IDEAL helical anchors in addition to support for these active sites with varying soil conditions.  Our knowledge continues to grow with our experience, and we made an interesting discovery.  Conti Enterprises installed 1 ¾” square shaft in Phase 1 on I-295 and 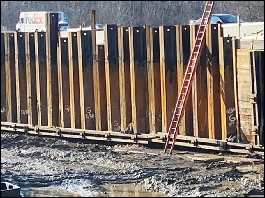 they tested well.  Later, we switched to 3 ½” and 4 ½” round shaft pipe to see how they tested and discovered that there was even less creep with the pipe than with the square shaft.  We continued with pipe on following phases and were able to achieve higher tieback capacities.   Click to view Danbro case history.

The situations that favor a helical anchoring system on these and similar projects involve ground conditions, equipment, and testing.  The soft clays encountered at this three-highway intersection site are more conducive to helicals than grouted anchors.  Shrink/swell clays were the soil type that inspired the invention of helicals and it is a soil condition in which they consistently perform well.  Additional helical plates, up to six (including extensions), were used to achieve the design load: up to 110 kip, at depths of 45’ to 85’ in various locations throughout the large site.  We have learned over the years that the use of helical trailers, with additional helical plates, can be added to achieve the load at shallower depths and avoid right-of-way issues.

No specialized equipment is required to install helical anchors.  Any hydra

ulic machine utilizing a drive string assembly can be adapted to install screw piles.  Unhook/drop the drive string and reattach the bucket (or whatever) and the same equipment can be used for other purposes.  This was particularly helpful on a sometimes-tight site with other contractors competing to complete their work.

Load testing is infinitely simplified by using helicals.  No waiting for the concrete to cure and circling back to re-mobilize to test the anchors, sometimes up to five days later.  Compare that to a helical pull test.  You can post-tension a helical anchor as quick as you can hang a whaler.

Helical anchors for many Highway and Heavy projects have proved to be a viable alternative to traditional grouted tendons, simplifying the installation and testing while saving time and money. Helicals versus grouted tendons are site-specific, but, as the New Jersey DOT, the Feds, and their contractors have discovered, sometimes helical anchors are the best “connection” and the right “moves.”