What Advice Mister Rogers Would Give to Installers

In the early 70’s, while in college, I interned at WQEX, the PBS affiliate in Pittsburgh, PA.  I was assigned to the children’s show, “Mister Rogers’ Neighborhood.” No great story here.  I met him, but we had no personal interactions; I was primarily a “go-fer” in my short stint with the show. I came to appreciate the show much more years later while watching it with my daughter.  Nonetheless, she remained singularly unimpressed that I knew him, even though, during the passage of time, the storyline evolved and he metamorphosed into my close personal friend and collaborator. 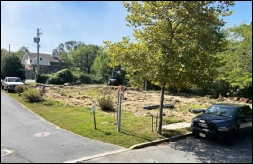 Mister Rogers started each show with his theme song, “Won’t You Be My Neighbor?” You get the drift: everyone from daily drop-bys like Mr. Feeney, the mailman, to everyone he met with on location visits to a store, firehouse, or school was his neighbor and deserving of courtesy and respect.

I have always advised our installing contractors to be a good, albeit temporary, neighbor when on site during a job. Mister Rogers’ sentiments aside, from a practical standpoint, it makes good business sense. Influencers, such as PM’s, architects, engineers, and owners, don’t need any distractions from an irate neighbor whose brother-in-law is a lawyer.  And, of course, if one property in the neighborhood need 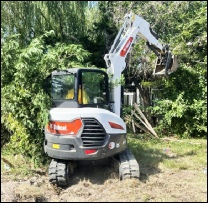 s a deep foundation, it is likely that others do as well. So, on-site conduct and professionalism is not only neighborly, but also a sound business practice.  Click here to read about Neighbor-Friendly Helical Jobs

Dave Grahn, owner of Pigs Heaven, is a helical contractor who understands and embraces this concept. Recently, he installed fifty-nine 2 7/8" IDEAL pipe piles at 314 Claghorn Place, Cape May, NJ. Unlike the Cape May Madison & New York project, which I wrote about in the June 2021 issue of HPW, this job was a relatively straight-forward deep foundation for a new home with limited site challenges. Pigs Heaven’s professionalism made it a non-event for the adjoining properties as well.  Click here to read the Cape May Madison and New York Article

Dave has frequently worked in historic Cape May and understands the strict rules and local sensitivities. In 2016, the Cape May City Council passed an ordinance

prohibiting driven piles in the “historic” section of Cape May and outlawing their installation during the summer tourist season throughout the resort. The time-honored American tradition of community activism by the Cape May Historic Preservation Commission paid off.  I also had a hand in this significant development but will save that story for a later issue on HPW. Click here to read Cape May Case Histories

On this job, Dave and his crew skipped lunch and other breaks and worked late to get the job completed in just three days. Rather than clogging the cul-de-sac with the equipment trailer, he stored it off-site and limited himself to one truck (parked off-street) in addition to the Bobcat excavator used to install the piles. I briefly interviewed three neighbors, owners of two properties to get their feedback on how this project affected them. Click here to read the Claghorn Place Case History 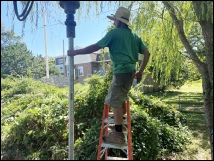 One unidentified woman allowed me to use her elevated porch to get a good photo of the whole site. She had her A/C on and the windows closed to prevent dust from infiltrating her home, but due to a favorable breeze, she could not detect dust, even on her front porch railing.  Philosophically, she said that you must learn to accept these things as she and her neighbors live in a desirable place where property improvements, even demos and rebuilds, are to be expected. She said she could hardly hear the noise and the contractor hadn’t blocked the street with a lot of equipment which was her major complaint the last time they had construction on the street.

Paul Lombardo, the inspector from Arthur Chew Consulting (Engineer of Record), noticed a couple who had stopped by the site. There w 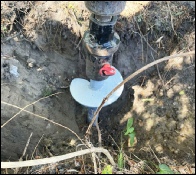 as a lull in the action as Pigs Heaven was removing some foliage, so Paul used the opportunity for some public relations work and went over to greet the curious observers.  It turned out that Bob and Carol built their retirement dream home in this same neighborhood prior to the new ordinance restricting driven piles and drove timber to support their property. Bob joked that he still has one neighbor with whom he has only a nodding relationship due to the disruption caused by the construction. This couple was well-aware of the new restriction limiting deep foundations to only helicals i 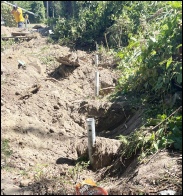 n the historic section.  In fact, they were familiar with helicals and had researched them as a possible foundation option for their home. They indicated their support for the ordinance as it makes eminent sense in a neighborhood with so many valuable, older structures.

Neighbor-friendly helical installations have been a driving (pun intended) force for much of the work our installing network has done over the years. Attention to local sensibilities makes friends and influences people who might need a “good” contractor themselves someday: one who conducted themselves well on a previous job in the neighborhood.