According to author Christine Ammer, the term “deadline” was coined at the hellish Andersonville, GA prison camp, and first appeared in writing in the report of Confederate Inspector-General, Colonel D.T. Chandler, on July 5, 1864. It referred to the line drawn within or around a prison that a prisoner crosses at the risk of being shot.  The sense of deadline that is most commonly found today (“a date or time before which something must be done”) did not begin to see popular usage until the early 20th century.

Cape May City, in the county of the same name, is an historic seaside resort at the southern tip of New Jersey. It is renowned for its Victorian architecture and has extremely strict zoning ordinances to preserve their historic structures while accommodating their number one industry, tourism. A recent project by veteran Danbro helical installer, Pigs Heaven, illustrates how the use of helicals can conform to a stringent code, with site challenges, while under a strict deadline.  Not quite Andersonville Prison strict, but construction projects in the summer in Cape May are almost non-existent due to their restrictive code. Click to see Pigs Heaven Site Challenges

Tom and Pam Harrison, the property owners, wished to revitalize and update the existing residence and develop the rest of the property to accommodate their growing family of adult children and grandchildren. The Victorian-era home’s exterior needed to be maintained in that period’s style. Interior renovations were more flexible, but the structure also needed to be raised to meet the baseline flood elevation established on the barrier island post Super Storm Sandy. 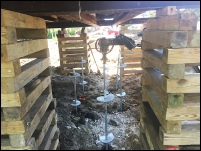 The house was raised up on cribbing and helicals were installed, in close quarters, for the foundation. Overhead was also a consideration, so five-foot leads/extensions and a small Bobcat walk-behind were used to deal with the limited access and height restriction. Pigs Heaven, the installing contractor, has extensive experience with house lifts and confined spaces.  Click to see Pigs Heaven House Lifts

The rest of the property’s structures could have been supported on driven or hydraulicly driven timber piles, except that the local code does not allow driven piles in historically designated areas or an

y time between Memorial Day and Labor Day, the summer tourist season. The city is also neighbor friendly and a home that backed up to the Harrisons on the northeast side of the property had just renovated and repointed their original field stone front porch.  All of the neighbors’ foundation concerns were calmed when they were informed that helicals screw gently into the ground, alleviating any vibration issues. In a town with many older structures with historical significance, neighbor-friendly construction is a requirement.  LEED compliant helicals are also easy on the environment which is a high priority for eco-sensitive tourist destinations like Cape May. Click to see Cape May website 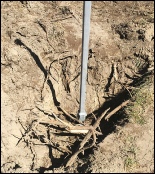 The new construction piles were relatively straightforward, except for the northeast corner of the property. Here, in an area of bushes and other recently removed vegetation, the root systems were causing the helicals to fetch up before reaching their minimum depth (25’). Pigs Heaven pre-drilled these areas to get through the roots and debris, allowing the piles to achieve torque (4,800 ft. lbs.) somewhere between 25’ and 30’.  IDEAL’s SS150, (1 ½” square shaft) is capable of 7,000-foot pounds of torque (70 kips ultimate) and the higher torque value also aided in muscling through the debris/vegetation layer. 10’ extensions also helped to speed the installation in the open areas, utilizing an excavator, one of 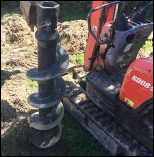 All in all, ninety-eight (12 ton design) 1 ½” square shaft helical piles were installed in less than four days by the end

of the day on the Friday before Memorial Day. “It took all hands on deck, some resourcefulness, and a few long days, but we got‘er done” stated Dave Grahn, the tired, but satisfied, Danbro Installer.

Pigs Heaven was under the gun, figuratively speaking, but met the deadline with no shots fired (metaphorically speaking).